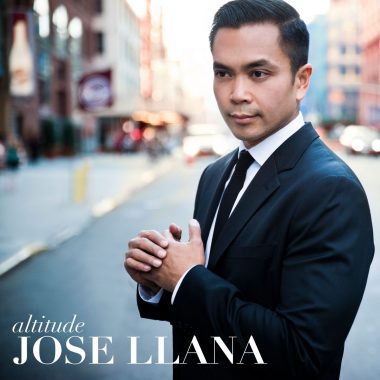 Altitude follows Llana through show-stopping highlights of his accomplished Broadway career. When this program debuted last year at Lincoln Center, a rave review from Flavorpill praised Llana as “an exceptionally versatile performer, thrilling the audience with contemporary pop songs and Broadway standards alike.” The album features several numbers from The King & I, including his personal arrangement of “A Puzzlement.” “Child of the Philippines” and “A Perfect Hand” come from Here Lies Love, the smash hit musical at the Public Theater which helped him explore his Filipino roots.

Ben Brantley of The New York Times said “he should have been nominated” for a Tony Award in his the role of Marcos. Other highlights include “Chip’s Lament” from William Finn’s Spelling Bee – in which Llana was called a “standout” by The Washington Post – and selections are from Adam Guettel’s song cycle Saturn Returns.
The album is rounded out by numbers from classic musicals Company and On the Town, pop hits from Billy Joel and Ed Sheeran, and a contribution from Pretty Dead Girl, a musical adaptation of the cult short film. Tony Award winner Ruthie Ann Miles , his co-star in the Off-Broadway smash Here Lies Love , is featured as special guest. Altitude  is produced by Michael Croiter  with Kimberly Grigsby  serving as Music Director.