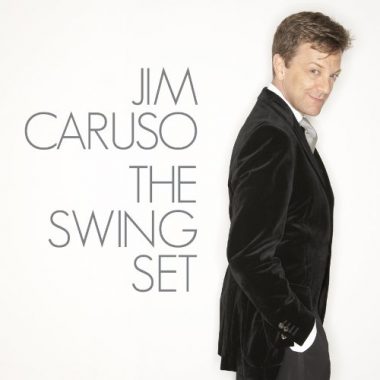 The Swing Set, a new album from six-time MAC Award winner Jim Caruso, is due out January 11th, marking the singer’s first release on the Yellow Sound Label. Caruso, known to most as New York’s master party giver, is bringing his bash to listeners everywhere with The Swing Set, a collection of wryly re-imagined standards and eye-popping new tunes, featuring some of the biggest names in jazz and theater. The urbane baritone is joined by Michael Feinstein (“Gotta Be This Or That”), guitar legend Bucky Pizzarelli (“If I Only Had A Brain”), pianist/singer Billy Stritch (“Avalon” and “Heart’s Desire”), jazz vocalist Hilary Kole (“Avalon”), Broadway leading lady Stephanie J. Block (“The Doodlin’ Song”), jazz violinist Aaron Weinstein (“l Love A Violin”), and others in a smart, sophisticated romp through the Great American Songbook. The recording has been produced by Michael Croiter and Aaron Weinstein, with musical direction and arrangements by Mr. Weinstein. Jim Caruso made his Broadway debut alongside Liza Minnelli in the Tony Award-winning smash hit Liza’s At The Palace!, singing, dancing and celebrating the music and arrangements of the late, great Kay Thompson and the Williams Brothers. For his nightclub work, Caruso has won six MAC and two BackStage Bistro Awards for his sold-out New York shows at Birdland, the Algonquin Hotel, and Arci’s Place; as well as runs in Los Angeles, Chicago, Austin, Atlanta, Palm Beach and London. He sang with the New York Pops in an all-star tribute to Kander & Ebb at Carnegie Hall, and returned to “The Hall” in a tribute to Bob Hope and Bing Crosby, hosted by Michael Feinstein. Jim and his vocal trio, Wiseguys, were invited to sing at President Clinton’s First State Dinner at the White House, and celebrated Bing Crosby in concert at Carnegie Hall with Rosemary Clooney. He guest-hosted “Broadway On Broadway 2000” in Times Square for a crowd of 100,000 theater fans, hosted the 2000 MAC Awards at Town Hall in Manhattan and has co-hosted the Drama Desk Awards webcasts for four years. For the past eight years, he has hosted a Monday night showbiz bash called “Jim Caruso’s Cast Party,” which was honored with a New York Nightlife Award, as was his continuing Broadway at Birdland concert series.